Ideas, innovations and initiative have continued to grow ‘Inside the Greenhouse’ throughout this Spring. Along with students at CU Boulder, we have sprout many new projects and nourished ongoing activities.

So far in 2016, among many research, teaching and other endeavors, we launched a successful ‘Stand Up for Climate’ comedy night experiment, culminating in a standing-room only show in March. We also published products from our collaborative projects with Native Voice 1 radio (featuring our interview with Winona LaDuke) and Casey Middle School (Boulder, Colorado) (featuring our interview of William Kamkwamba). We created an exhibit in the new Sustainability, Energy and Environment Complex (SEEC) at CU Boulder entitled ‘Young Women’s Resilient Voices’. And we worked with forty undergraduate 3rd and 4th years students in the classroom in our ‘creative climate communications’ Spring course.

As we continue to work, support from you is critical. Please visit our donation page to provide a tax-deductible gift. Any amount helps us as we move forward with our work.

Up with hope,
Rebecca Safran, Beth Osnes and Max Boykoff
(Inside the Greenhouse co-directors)

Participants in the course worked to deepen their understanding of how issues associated with climate change are/could be communicated creatively, by analyzing previously created expressions from a variety of media and then by creating new artifacts and compositions. Class visitors – including 7News Weather (Denver) Chief Meteorologist Mike Nelson and Professor Peter McGraw (Psychology and Marketing, CU Boulder) – provided additional perspectives and insights. 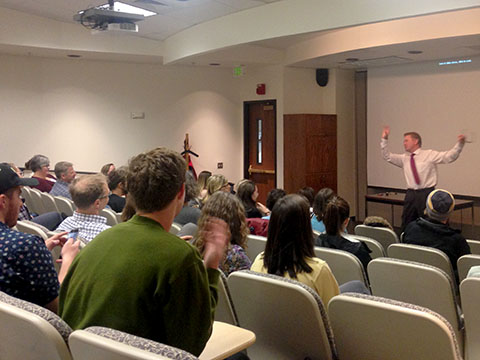 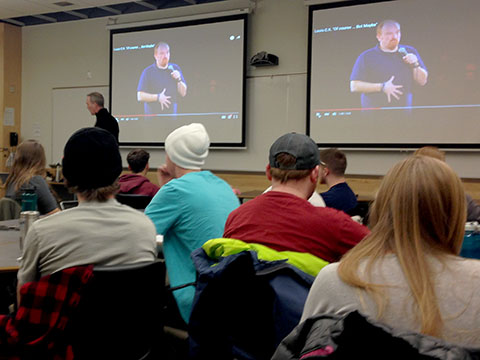 Throughout the semester, students also appraised and extracted effective methods and techniques through roundtable co-facilitation discussions of peer reviewed research on climate communication and public engagement.

Students applied these findings, insights and lessons to their creative work in the course. They collaboratively pursued three compositions: (1) they created and produced a short video based on an interview of a climate scientist, depicting human/personal dimensions of their work; (2) they developed a climate change-related sketch comedy or stand-up comedy act and performed it on stage during a live CU Boulder performance; and (3) they developed and produced a podcast, re-telling climate stories through audio. Please see the Class Projects page for more information. Together, these compositions aimed to challenge students to engage creative climate change storytelling through multiple modes or systems of communication.

On a cold and snowy St Patrick’s Day evening, students from the Spring ‘creative climate communications’ course and 70-80 others packed into the CU Boulder Atlas Institute Black Box theatre for an evening of ‘Comedy for Climate Change’. Students in the spring course performed comedy skit or stand-up comedy routines. They carried out these (brave) acts in the spirit of finding ways to connect with different audiences to make climate change more relevant and meaningful through humor. 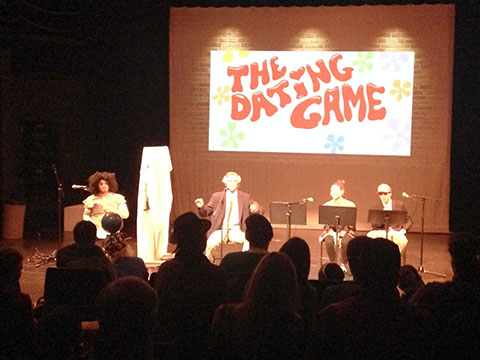 In addition to the student performances, the winners of the first ‘Inside the Greenhouse comedy and climate change short video competition’ were announced and their videos were shown, and additional ‘talent’ from across CU Boulder took part in the event.

When we embarked on comedy mixed with climate change, we recognized the risks of trivializing a critically important issue. We also carefully considered the elements of audience and context. Through the process – and products in the show – audience feedback through survey data, the general atmosphere on the night and further feedback from the students after the event all indicated that the experiment was seen to largely be a success. See the performances on our site. 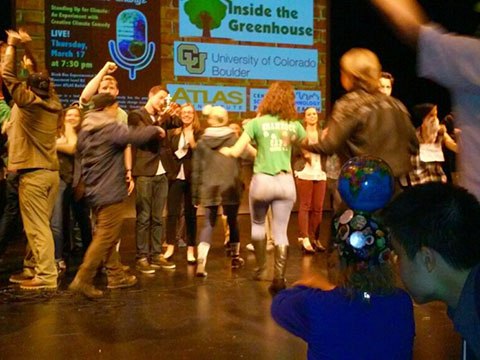 Each newsletter we feature past students from our two-course series. This issue, we feature William ‘Max’ Owens, who took Rebecca Safran’s Fall 2014 course. Max also returned to help in the classroom for both the Fall 2015 and Spring 2016 courses. We also feature Johnny Mabie, who was a student in Beth Osnes’ and Max Boykoff’s Spring 2012 course. They offer some comments, in their own words:

William ‘Max’ Owens
If I had to choose a single experience in my undergraduate career that most impacted my life's trajectory, it would have to be Film and Climate Change course (ATLS 3519/EBIO 4460). I entered the Fall 2014 course with an interest (but little experience) in film. I came away with a solid foundation in video shooting and editing, as well as science communication. The story, I learned, is paramount. I realized a passion for visual storytelling, and with the skills I picked up during the course, I began to pursue more experience in that area.

In addition to telling our own climate change-related stories through film, the course brought in leaders in the fields of science communication and film to share their experience. In the culmination of the course, we each presented a piece in a film festival before a public audience and a panel of judges (including several award-winning filmmakers). I went on to intern for one of those judges, Neil Losin of Day's Edge Productions. With a PhD in evolutionary biology and an amazing work ethic when it comes to shooting and editing, Neil was a model science communicator for me. I've continued gaining film experience with other production companies and on personal projects. 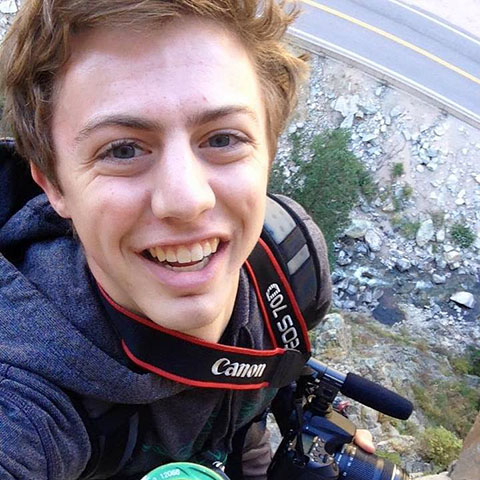 Last fall I had the opportunity to return to the course in Fall 2015 as a teaching assistant for Becca Safran (who, along with Tyler Jones, inspired me to aim high when I took the course several years ago). I also worked in the classroom in Spring 2016 with Max Boykoff. It felt like everything had come full circle: I saw in several students a passion for storytelling of the sort that I felt. I don't doubt that the course changed the trajectories of their lives, too.

Johnny Mabie
I always wanted a career creating media, but wasn't sure how viable a career in "meaningful" media might be. I eagerly took the first-ever ITG class hoping to start the conversation. After graduating, I worked as a graphic designer for an environmentally-minded startup. Their tagline was “Designing for greater good.” The fact that my degree was in Environmental Studies and my practical skills were self-taught actually gave me a unique advantage over other candidates who may have been more technically trained, but lacked the multidisciplinary world view that Environmental Studies and, more specifically the Inside the Greenhouse project helped me develop. My Environmental Studies background has given me more leverage in the media world than I could've ever imagined.

Fast forward, & I currently work as the Finishing Editor at a digital content company called ATTN: in LA. We produce videos about meaningful topics including environment, politics, and social justice. With a median view count of 3.6 million, we are consistently releasing content that pushes the Environmental Studies ethos further into the mainstream. The demand for meaningful content is only growing, and I strongly encourage anyone with a passion for both sustainability and pop culture to dig for the opportunities in this media revolution. You might find the perfect fit! 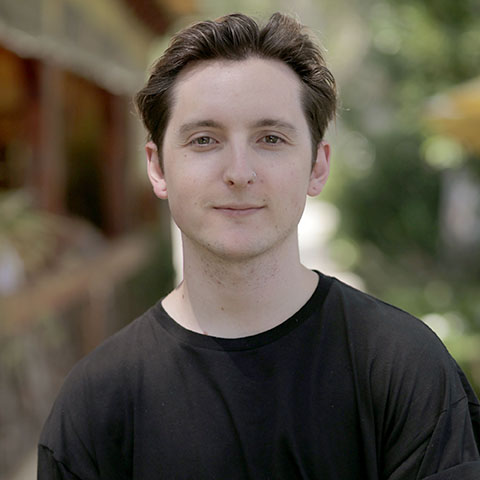 Random Acts of Green
While touring the Inside the Greenhouse production, Shine, to London, Inside the Greenhouse co-founder Beth Osnes got inspired to interrupt the cityscapes of some cities that are part of the 100 Resilient Cities Initiative with some random acts of green. Beth’s emergent goal was then to infuse embodied creativity into the greening of our cities. Placing actual bodies in service of this vision marks the commitment to joyful acts that will inspire action on behalf of environmental sustainability. Sometimes it takes a literal representation of an idea to make it real. 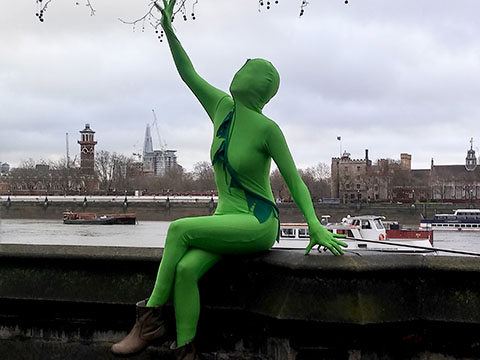 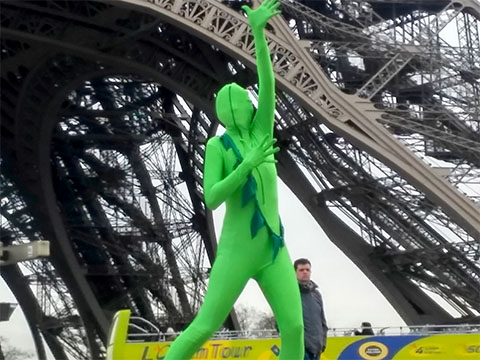 If you feel moved to don a green suit with a sash of leaves, please contact beth.osnes@colorado.edu to have a green suit sent to you. You simply get your photo taken in an iconic place in your community, send the photo to us, and we will post your photo on our blog to add to our collection. Then please just send back the green suit so we can share it with others. You can also order your own full body green man suit online for about $30. We welcome your contributions to our green cities photo album or hope you will share this link via your social networks to inspire more random acts of green.

Performance for Resilience: Youth-sparked Community Engagement for Climate, Energy and Resilience Planning
Cities throughout the world are being challenged by the Rockefeller Foundation 100 Resilient Cities Initiative to author plans for resiliency in the face of climate shocks and social stresses. Beth Osnes is working on a book, Performance for Resilience: Youth Engagement with Climate and Energy based on the tour of a community-based performance, Shine.

Shine is a mini-musical performance that serves as an activating framework to encompass multiple narratives for authorship by local communities to reflect each community¹s unique challenges and ideas for local solutions. It weaves climate science and artistic expression into a funny and powerful story that spans 300 million years of geological time to convey how humanity, energy, and climate are interrelated. Rehearsing each part of the musical immerses youth in the lexicon surrounding resilience and leads participants in embodying different aspects of climate science and human development that led us to the point we are now-- where our use of fossil fuels is impacting our climate. While the first half of the show is scripted, composed, and choreographed to convey this story that has already been told by history, the second half is left open to be authored by local youth to generate solutions for their city¹s resilient future.

Ongoing information-sharing, talks and workshops
This spring, Inside the Greenhouse participants have led information-sharing and participatory workshops as well as giving talks involving creative climate communications. Among them, co-director Beth Osnes traveled to London to lead a week-long artist in residence at the University of East London, after which 19 UEL students and Osnes led a primary school in East London, Riverside, in a performance focused on energy and climate issues entitled Shine. Also, co-director Max Boykoff spoke at the Royal Society of New Zealand in Wellington about climate change communication and politics, as part of their ‘Talking Climate’ lecture series.