Already in the Anthropocene, and entering into the Trumpocene on planet Earth, we find it more important than ever to work to meet people where they are and ‘re-tell climate change stories’ from a range of perspectives, thereby providing opportunities to make sense of 21st century changes in the climate. Moreover, we are more determined than ever to help students build confidence and competence in order to deepen our understanding of how to effectively address issues associated with climate change.

The chosen name of our project – Inside the Greenhouse – acknowledges that, to varying degrees, we are all implicated in, part of, and responsible for greenhouse gas emissions into the atmosphere. So in our efforts we treat this ‘greenhouse’ as a living laboratory, an intentional place for growing new ideas and evaluating possibilities to confront climate change through a range of creative communication approaches.

This Fall has been a wonderfully productive time Inside the Greenhouse. Read below for some samplings of our activities and ongoing commitments. Also, your support is critical as we collectively more forward. Please visit our donation page to provide a tax-deductible gift. Any amount helps.

Up with hope,
Beth Osnes, Max Boykoff and Rebecca Safran
(Inside the Greenhouse co-directors)

Our Film and Climate Change class: an update from the end of the eighth term
by Rebecca Safran

It is hard to believe we’re nearing the end of the eighth semester of the class on Film and Climate Change! As this newsletter goes out, the students are busily preparing their final film project which will be showcased at our annual Climate Change and Film Festival (Friday, December 9th, 5 – 8 pm, in Atlas 100 on the CU Boulder campus, open to all!).  We have had a busy term and the students have been great from start to finish.

I have had the great fortune to work alongside Ben Crawford and Barbara MacFerrin this term, two star students from the 2015 Film and Climate Change class. We ask a lot of our students; their first film project – a self-reflection piece modeled after the StoryCorps project - is due two weeks into the term. This gets their feet wet with filming and editing and most importantly the art of storytelling.

Storytelling is the centerpiece of this course. 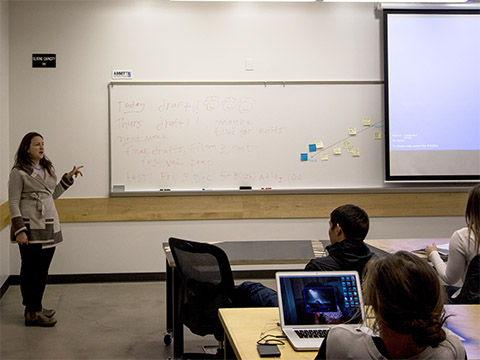 Our primary goal is to translate the science of climate change into relatable, memorable stories. I’m humbled by how the students approach their work and their willingness for personal reflection. Our second project involves a continued collaboration with the More Than Scientist project during which my students work in pairs to interview and document the stories of some incredible climate change scientists. The final project is on a topic of their choosing and can take many forms, formats, and styles: this year, we’re looking forward to some humor, some animation, a few serious post-election pieces.

In all, I’m thankful for the ability to work with such an engaged and hard-working group. They are the center of our mission and keep us inspired! 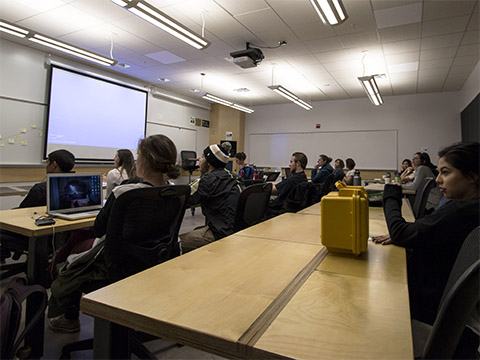 For the past three semesters, Inside the Greenhouse has collaborated with the innovative More Than Scientists (MTS) project, primarily through our class activities and composition works. The MTS project features climate scientists in their own words, capturing on they think and feel about climate change. MTS works to show that scientists aren’t just studying the world, by they are also living in it.

Groups of students in our courses have taken advantage of the high concentration of climate scientists in our local area, and have interviewed researchers from the National Center for Atmospheric Research, National Renewable Energy Laboratories, the Cooperative Institute for Research in Environmental Sciences, the Institute for Arctic and Alpine Research, and the National Oceanographic and Atmospheric Administration, the Laboratory for Atmospheric and Space Physics (LASP) and various other units at CU-Boulder (e.g. Atmospheric Sciences Department, Environmental Studies Program, Geography Department, Ecology and Evolutionary Biology Department) to depict a human and personal motivations behind their work in short-form videos. 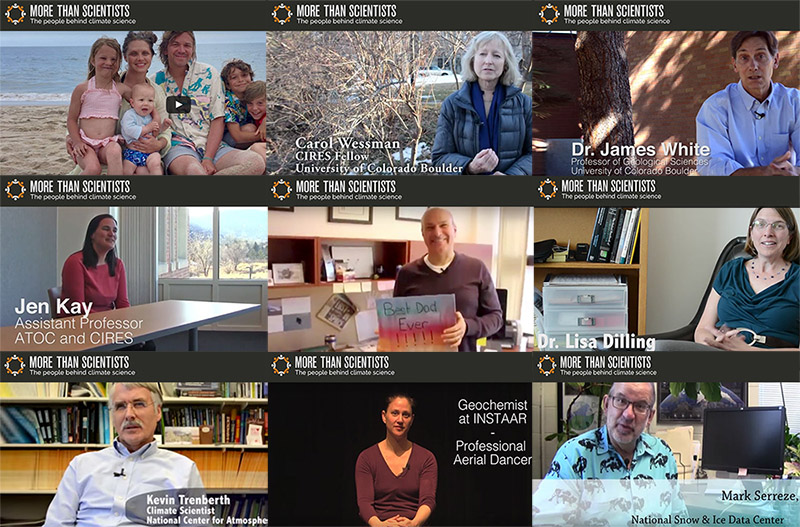 With help from ITG alum William ‘Max’ Owens in the 2015-2016 academic year and now in this 2016-2017 academic year with Barbara McFerrin at CU-Boulder, CU Boulder students have produced about two dozen videos to date. Examples include interviews with Dr. Paty Romero Lankao from the National Center for Atmospheric Research, Dr. Phil Taylor from the Institute for Arctic and Alpine Research, Professor Lisa Dilling from Wester Water Assessment, Professor Waleed Abdalati from the Cooperative Institute for Research in Environmental Sciences, Professor Jen Kay from Atmospheric and Ocean Sciences at CU Boulder and Professor Mark Serreze from the National Snow and Ice Data Center.

Relating to the active collaboration mentioned above, on Sept. 14th, the founder of More Than Scientists, Eric Michelman, joined us at CU Boulder for an event through the Sustainability Residential Program at Williams Village. There we showed films made by our Inside the Greenhouse students that have been widely disseminated through the More Than Scientists website.

A crowd of over 80 students, faculty, and community members joined us for pizza and the showing. In each of these short films, our students interviewed notable local scientists about the human aspect of their relationship to the climate issue.

To begin the evening’s program, Eric Michelman was able to share the story of his career and life that led to his founding of More Than Scientists—a website featuring brief video interviews with scientists sharing their personal hopes and concerns about climate change.

Professor James White and PhD student Mike MacFerrin were both in attendance to speak with the audience briefly after their videos were shared.

And Dr. Paty Romero-Lankao (scientist at the National Center for Atmospheric Research) was featured in another video shown at the event. Her daughter, Xia Duffing Romero, spoke afterwards about growing up with a climate scientist as her mother.

Left Photo: Professor Jim White offers some comments after attendees viewed his film – photo by Max Boykoff
Right Photo: Xia Duffing Romero – daughter of Dr. Paty Romero Lankao, a featured scientist in a More than Scientists video shown during the event – speaks from her perspective about climate change in the 21st century – photo by Max Boykoff

Also, Jim Balog (of Chasing Ice) joined us for the event with his father (Jim Balog Sr) who was visiting. One student upon recognizing James Balog burst into tears, as his work had made such an impression on her and she was overwhelmed to meet him. 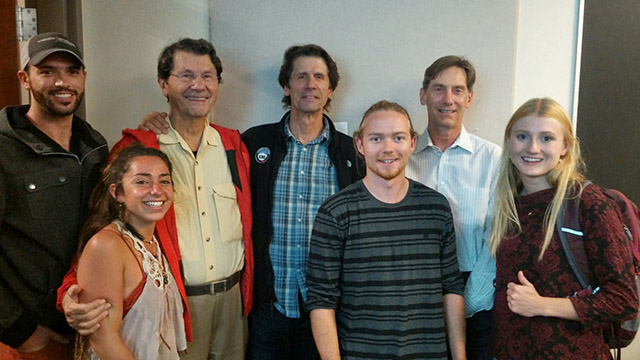 ‘Three Jims’ along with some students at the September 14th event: Jim White (back right), along with James Balog Sr. and James Balog Jr. (back center); photo by Beth Osnes

Designed to inspire students and highlight the human side of scientists, the September event delivered on all counts.

As people arrived to the event with BoCo (Boulder County) Strong, they were invited to stand against a wall or lie on the floor in a dance pose and get ‘traced’ by brightly colored masking tape. The opposite of a crime scene outline, these were testimonies of the embodied and expressive presence of willing participants at a Performance for Resilience event on November 17th at the University of Colorado cohosted by Inside the Greenhouse and BoCo Strong. 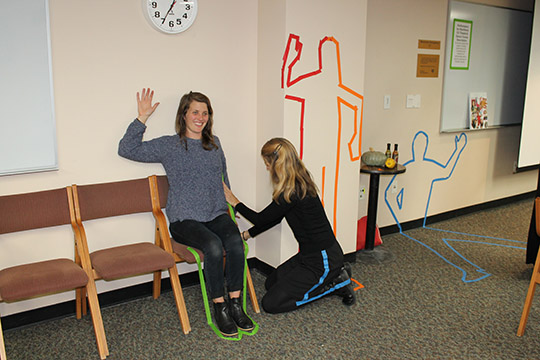 Community member getting traced at the start of event, photo by Meridith Richter

Their poses caught in time and space helped transform an ordinary conference room into an extra-daily space for creative exploration. The process of tracing got the student-hosts of the event and the attendees in close proximity and in unlikely relationship to the room. This activity also set the tone for an evening of exploration into how performance can be used as a tool by community partners within Boulder County to increase their capacity for resilience.

Students of a class entitled Performance for Resilience (taught by Inside the Greenhouse co-founder, Beth Osnes) instigated these partnerships and designed performance solutions to address vulnerabilities and gaps identified by the community organization. For examples:

City officials, CU students, community members and community partners joined us for a fun, participatory evening to experience the power of performance for strengthening the capacity of resilience for Boulder County. 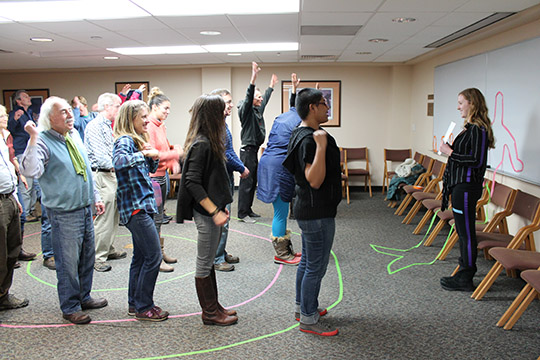 “What are those black clouds with sad faces on them?” Meridith asked an eleven-year-old participant of SHINE: A Musical Performance for Youth Authored Resilience. They were looking down at the massive, hand-painted timeline the kids at the camp had created to illustrate the history of the Earth. It starts 300 million years ago in the Pennsylvanian Period, where the kids have painted trees and vines to portray a lush, vegetation-covered planet. The timeline moves through each subsequent period all the way to the present, where the ominously dark clouds in question hover over towering smokestacks and sputtering cars. 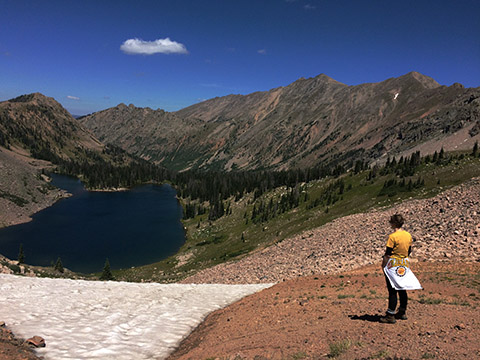 “Oh that’s the present day. It’s kind of sad because we have a lot of carbon in the air and it’s not really that happy. But then we have the future,” she says, pointing to just beyond the gloomy scene, “which is happy if we can make it happy.”

Through video, Meridith gave expression to the artistic process these youths went through to grow in their understanding of how our energy-use impacts climate. Then they, in turn, performed that story along with solutions to local climate issues for a gathering of family and friends. 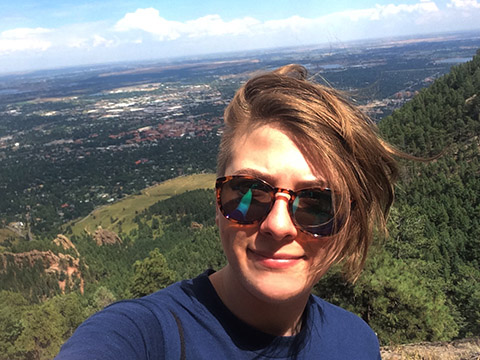 Meridith is continuing to work on the documentation of Shine as her capstone project for her Technology Arts and Media certificate through ATLAS at CU. Her digital materials on the various aspects of the performance will be published as part of the digital book on Shine through Palgrave Press. Meridith brings her fascination with sound design and her skills with video editing to this project. 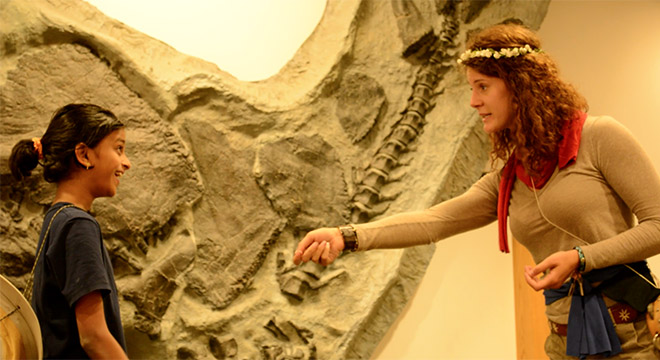 Photo of a youth participant with Mariel Kramer (right), by Meridith Richter of the Shine performance at the Science Discovery camp Summer 2016

This fall, Inside the Greenhouse participants have led information-sharing and participatory workshops as well as giving talks involving creative climate communications.

Co-director Beth Osnes presented on Inside the Greenhouse at the Alliance for the Arts at Research Universities (A2RU) at the University of Colorado in Denver for their annual conference early this November. She has also moved forward with work on her book manuscript sharing lessons learned from the tour of Shine, the original Inside the Greenhouse musical for youth engagement in resilience planning.

Also, co-director Max Boykoff spoke about Inside the Greenhouse work at a side event at the United Nations Conference of Parties (COP22) climate negotiations in Marrakech, Morocco.