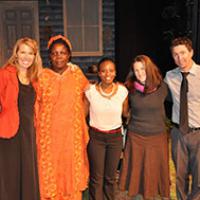 Women who see high tides destroy their food supply and submerge their homes. Women who watch a merciless cycle of unprecedented floods followed by droughts drown their children, wash away their livelihood, and then suck their crops dry again. Women who pick up the pieces, improvise solutions and, facing their very survival, carve out unconventional paths to leadership.

Climate Wise Women is a global platform for the promotion of women’s leadership on climate change. Through powerful personal narratives, Climate Wise Women gives a human face and voice to an issue that sits squarely at the nexus of the conversation on gender equality, environmental justice, food security, the eradication of extreme poverty, and public health. More info.

Constance Okollet is the Chairperson of the Osukuru United Women's Network and one of the founding members of the Climate Wise Women. She is a peasant farmer from Tororo district in Eastern Uganda Africa and a mother of seven. The Osukura United Women's Network includes 42 regional groups representing over 1200 women in Uganda's Osukuru Subcounty. In 2007, heavy rains destroyed the homes and food supply of Constance's village displacing all of its residents. Starvation followed. Once the situation stabilized, the community was dealt a second blow: an unprecedented drought which dried up crops and wells, reigniting the cycle of hunger and thirst.

Through a regional meeting with Oxfam in 2009, Constance and her community learned that climate change, caused by the carbon emissions of the developed world, was responsible for the catastrophic changes in their normal growing seasons. Constance has addressed the UN General Assembly on climate change and participated in numerous international events, speaking on behalf of her community for climate change consciousness and climate justice.

Ngozi Onuzo is a 23-year old passionate youth advocate from Nigeria, who works on issues around Environment and Climate Change. She holds a degree in Geosciences and Environmental Science & Policy from Smith College, MA. She is currently completing the National Youth Service Corps at the Nigeria Hydrological Services Agency in Abuja, Nigeria. Early in 2013, she became co-founder of the Young Women United for Community Change (YWUCC) in Nigeria, an NGO that focuses on empowering and informing youth, especially young women, about the environment and wholesome living through community outreach, mentoring, leadership, resource mobilization, and skill building workshops.

As a Sierra Club Global Population and Environment Fellow, she advocates for better standards of environmental sustainability and reproductive health. Through her enagagement with Sierra Club, she earned a grant to implement community outreach programs targeted at young people on environmental, reproductive health and population issues. Ngozi has developed skills in engaging media, policy analysis, advocacy, public speaking, social media, and community organizing. She is also part of the Passionistas group, a social group that creates a platform for young women to learn, share, inspire and network. One of her dreams is that women around the world will be liberated from the limitations of culture and rise up in full capacity to become Global Change agents.